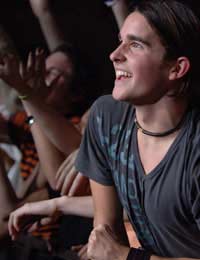 British music has evolved across many styles over the past century.From rock and roll through punk rock and heavy metal; to folk, folk rock, progressive rock,Britpop to rap and drum and bass....so many styles have evolved from Britain, involving and led by British musicians. And this is only one genre of music! In the classical music world, musicians and composers have continually worked with different styles and instrumentation – looking backwards as well as forwards to interpret and re-interpret the classical sound.

New performance venues have sprung up over the last 20 years, partly helped by lottery funding, along with new opportunities for musicians and funding for scholarships, which have led to a culture of creativity and exciting innovation.

While it is not everyone's 'cup of tea', folk music in Britain (drawing on strong roots from all of it's regions – Scotland, Northern Ireland, Northumberland, and Wales, in particular), there has seen big shifts in the folk music scene. Largely led by the Waterson and Carthy families, especially Martin Carthy, folk music has proved itself prime for crossover and fusion. From early innovators like Jethro Tull, John Martyn, and Richard Thompson, a 'folk-style' sound underpins a lot of current British guitar bands. Listen closely for folkie riffs! Check out the current British folk scene at a folk club near you, to hear the rising stars of this fine, original and often earthy tradition.

The major movement in rock and roll in Britain was due to the impact of The Beatles on popular music at the time (the 1960's) and their impact upon popular culture too. As well as the fab four, this new wave of rock and roll in the sixties spawned many other acts of a similar genre: Rock and roll in Britain at that time meant liberation from pre-war austerity; teenagers could dance, drink and smoke, and enjoy the new sounds and freethinking lyrics of these bands and singers. R and R coincided with the advent of the pill, so sexual liberation was a big part of this intoxicating package.

Britpop started in the early 1980's, with the rise of several bands such as Oasis, Blur and Suede amongst several others, who heralded a new movement of British pop bands, creating a new 'pop' sound with fast guitars and lots of attitude. They all had effective marketing machines and record labels behind them and the music press and fans quickly got behind the phenomenon. Bands toured widely, especially in the US, which lapped up anything seen as British, following on from beatlemania. Rivalries between the bands, and sometimes within the bands (namely the Gallagher brothers of Oasis) fuelled the gossip and kept the phenomenon alive.

New Movements and Trends in Music

There are always new trends happening in music: often it just takes one band or solo singer to emerge with a unique style, or using a particular instrument in one particular way (for instance, JimiHendrix's unique picking of his guitar strings: with his teeth, behind his back, etc........or The Who's habit of destroying their instruments onstage at many gigs and a new movement is created.

How long it lasts depends both on originality and luck. Who sees the birth of a new trend is important too: in this age of spin and hype, mastered by influential journalists, there is a certain amount of myth creation that happens and is spread by the media and through word of mouth.

However it happens, Britain is at the forefront of creating new contemporary shifts and waves in music, across all genres, so keep your eye on the current British scene, and spot the stars and wave makers of tomorrow!