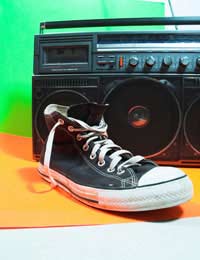 A Softer Sound: British Popular Music of the 1980s

After the frenetic pace of change in the 1960s and the darker psychedelia of the 1970s, British popular music took on a softer sound in the 1980s. This was the era of the so-called 'New Romantics', where escapism took hold in songs that emphasised fantasy and the imagination.

This softening of Britain's musical soul however didn't last through the decade: the idealism of bands like Spandau Ballet, Ultravox and Midge Ure, Culture Club, and Duran Duran, was met with the hard-edged realism of bands like the Jam and Paul Weller, and bands from the north of England had their ascendancy - New Order, Joy Division, The Smiths; coupled with Billy Bragg and the political left's response to the scourge of Thatcher-inspired ideology, Red Wedge.

“Dancing, with tears in my eyes” : British Pop Seeks an Image (lyric:Ultravox)

Looking back, the start of the 1980s weren't a glorious time for British popular music.Bands seemed to have lost their way after the hedonism and experimentation of the previous 2 decades. Individuals like Freddy Mercury and David Bowie continued ploughing their own way, and great music came out of a few inspired individuals like them, but the election of Margaret Thatcher and the Conservative party in 1979 heralded a general wave of creative apathy across the country. Artists working in all media quickly interpreted the new political climate in the country as a 'with us, or against it' mentality, and the seeds were sown for eventual confrontation.

“Money's too tight to mention” : The Rise of Reactionary Creativity (lyric: Simply Red)

The new wave of music in the early part of the decade included bands such as Wham, Duran Duran, Spandau Ballet, Culture Club, Ultravox, and individuals like Howard Jones, Rick Astley, and Kylie Minogue and Jason Donovan; the last few products of skilful creation and marketing by publicists Stock, Aitken and Waterman. Most of this music was simply a product of its time, and is light, fluffy, momentarily enjoyable but also instantly forgettable. Many of the lyrics of these bands hint toward the perfect relationship, or aspiring to live the high life, with little concern for the here and now. Many of these bands were living lives far removed from the reality that their listeners experienced.

However, some folk responded to the age differently. In the North of England, where the economy was entirely different from that in the South of England, bands such as Simply Red, with its enigmatic front man Mick Hucknall, were forming. They were part of a radical explosion of talent from the city of Manchester. New Order and Joy Division, led by the brilliant, troubled Ian Curtisand later, The Stone Roses, all sprang from Manchester's roots.

“The Queen is dead” : The Smiths – Angst, and Counterculture

For many growing up in Britain in the 1980s, one band and one singer represent that time. The Smiths encapsulated for many a time of turbulence, inner angst, and outward fumblings. With radical songs about graveyards, vegetarianism, and ambivalent sexuality, all tumbling from the lips of an iconic singer with national health glasses and gladioli in his back pocket, Morrissey sang to the disenchanted, disaffected (but highly intelligent) youth and gave them a candle in the dark.

Politics and Rebellion : “All I'm looking for is a New England” (lyric Billy Bragg)

The Miner's Strike and the violence many saw with their own eyes or on TV nightly in 1984 shocked a nation, and musicians responded to this and other social issues with a conscience.Billy Bragg, a radical singer/songwriter, toured the country with Red Wedge, an artists backlash movement against Tory discrimination. The Jam and Paul Weller were “Down in the tube station at midnight” : punk was stirring with bands like the Sex Pistols, the Damned (with roots reaching into the 1970's music scene as well), and on July 13th 1985, Bob Geldof and Midge Ure created an event to highlight and raise funds for famine relief in Ethiopia; Live Aid.

Billed as 'the day that music saved the world', this event saw many performers play and collaborate both in the UK and the US. Over 1.5 billion viewers over 100 countries watched the live broadcast, and approximately 150 million pounds were raised for the cause. An astonishing event, and a wonderful merging of creativity and altruism, coming in the middle of a turbulent decade.