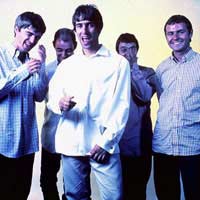 British popular music in the 1990s continued to ride the political wave of the mid to late 1980s and seemed to catch some of the fervour of counter-culture rebellion that had first started in the 1960s. Events such as Live Aid had mobilised musicians to believe in the power of their art, and see music as a transformative skill, and not just a bland, moneymaking 3 minute pop song.

Formed in 1991 in Manchester, by brothers Liam and Noel Gallagher, Oasis have been described in The Guinness Book of hit singles and albums (in 2005) as ' the most successful act of the last decade in the UK.'

They are known as the prime band of a new wave of music, called 'Britpop', that emerged in the 1990s in Britain, along with other bands like Inspiral Carpets (who Noel Gallagher was a roadie for before his career took off) Blur and Pulp. Drawing comparison to The Beatles, after massive outdoor concerts in the UK (noticeably at Knebworth in 1996, where 3.5 million people applied for the 250,000 tickets available for the 2 back to back gigs) , Oasis initially conquered America, then faced plummeting record sales there. After a hiatus, the band are currently working on their seventh studio album. Some critics have called them 'The Sex Beatles', mixing the distinctive influences of The Sex Pistols with The Beatles!

Pop and Politics – the Continuing Dance

Also infamous for attending an event at Prime Minister Tony Blair's Downing Street, in which the PM cynically wanted to draw together arts and politics, Oasis were seen for a time as the coolest band on the planet. Blair's early optimism and opportunism vanished – many present at that event later spoke out against the Labour Government for not financially supporting the arts, and simply indulging in spin. Incidentally, Tony Blair is currently the only serving Prime Minister with musical ambitions of his own: his university band 'Ugly Rumours' were alleged to be quite good, and there is a rumour they may now reform now he has more time on his hands.

'The Bends' : Radiohead and Other Streams of Sound

Radiohead were formed in 1986 in Oxfordshire, and released their first single in 1992. Unpromisingly reviewed then by NME (the highly influential but, sometimes wrong, music paper, New Musical Express) as “ a lily livered excuse for a rock band”, they produced a stream of albums, including 'The Bends', 'Ok Computer', and 'Amnesiac', that saw their transition from outsiders to princes of British pop within the decade. Singer Thom Yorke has a highly unusual falsetto style, which makes Radiohead's sound unique and one of a kind.

Other bands of note from the 1990s, to cherry pick just a few, are Massive Attack, Prodigy, Leftfield, Suede, The Verve, The Charlatans, Primal Scream, Bristol band Portishead, Tricky, and of course not forgetting the illustrious and empowered girl-band, The Spice Girls, formed in London in 1994.