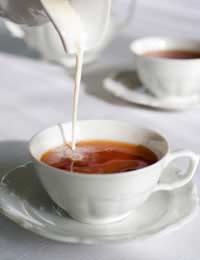 What are the traditional British drinks and why have we taken particular beverages to our heart and not others? What is it about this Island-race, surrounded by water on all sides, and with a high level of annual rainfall, so selective in our drinking habits ?

Brits are addicted to tea. We consume it in vast quantities, either as industrial strength, brewed and steeped for hours from a tea-bag (or several), or in a more refined, loose leaf, afternoon earl grey type of way.

Scour the supermarket shelves and the type and variety of tea will astound and amaze you. From the regular - is there really a regular tea anymore ? - to earl grey (flavoured with bergamot), lady grey, white tea with peach, green tea in an assortment of permutations, lapsang, Darjeeling...and this is just the supermarket selection. Check out your nearest teashop to find more bewildering choice!

How we have our tea is also a serious choice - with or without milk, with lemon, with several spoonfuls of sugar or not. This love of tea, even in hot weather, for which it is proven to have a cooling effect, originates from the British colonization of India, and the discovery of tea there.

For a culture that cannot grow tea on its shores, we sure drink a lot of it!

British beer, or bitter as it should be known, has always been popular since the discovery of brewing with hops, sugars and yeast back in the early 13th century.

Beer drinkers tend to divide into 2 camps - those who drink the lighter lager beers, generally brewed outside the UK, and bitter drinkers, who prefer more flavour to their pint, and are passionate about local ales and the differences between local breweries.

Members of the Campaign for Real Ale (CAMRA for short) meet regularly for tastings and festivals, and fight passionate campaigns if a small brewery is faced with closure. They have helped to keep a choice of British beers available, and kept the institution of the great British pub alive as well.

Beers well worth sampling are Flowers, Sam Smiths, London Pride, Greene Kingand Adnams, as well as many available from your local area. Look out for offerings from small-scale microbreweries. Dive in to a great pint of British ale!

Cider is also undergoing an upsurge in popularity, and this fruity alcoholic juice is benefiting from the interest in organic foods and drinks.

Blessed with many orchards and a range of great British apples (which as a collection of different types, is sadly diminishing in range, due to the mono-cultural thinking of many bigger-scale farmers), cider is an earthy, refreshing drink, best served chilled and by the hearty gallon.

Best drunk in the open air, at a country fair or in the garden, while enjoying the summer.

Pimms is a very refined alcoholic punch, made with fruits and alcohol. It has a slow effect, and sometimes the boozy hit creeps up on the drinker.

Best served in a large bowl with lots of ice, cut fruit and traditionally cucumber slices... ladled into glasses.

Traditionally a drink for the upper classes, it is now very popular with everyone as a summer drink. Students in particular down huge quantities at the end of their summer term!

The elusive nature of gin, classically served with tonic, ice and lemon remains phenomenally popular, and there are many brands of this quintessentially English drink available.

This is a classic and enigmatic British concoction, which has slowly been reappearing on the soft drinks market in the last few years.

Traditionally made pre-war by combining the roots of dandelions and burdock leaves, the unique taste of these ingredients is now artificially manufactured, and seems sweeter and more sickly than memories of the original drink.

It is an original and acquired taste, well worth sampling. Serve instead of the ubiquitous coke, with plenty of ice.

Ginger beer, perhaps more than dandelion and burdock, maybe more than cider, for kids and teens, is the taste of a British summer. Sample several of the varieties available - look for a less sweet version, that has a more intensive hot ginger burst,and enjoy the rush of the gingery bubbles gurgling down the throat.

Kits are available in health food stores to make this drink yourself if you want a challenge ! Its good fun and even better drinking !