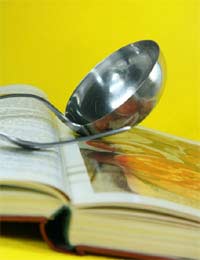 If someone arrived in Britain for the first time and switched on the television, they might get the impression that the British spend all our time cooking. We seem to be a nation of cooks, with half a dozen television shows every night devoted to a chef showing off, and cooks relentlessly promoting their new cookbook, teaching us all how to cook such and such a fancy new dish.

There are now reality television shows that chart the successes and failures of participants in a cooking school, where the head chef demonstrates her skills, then leaves the participants to copy her food, and then she slowly boots somebody out each week, dashing their dreams of becoming a professional chef.

The Early Days: Chefs on Television

Fanny Craddock was one of the early popular television chefs in Britain, dominating the airwaves soon after the war had ended and rationing was on its way out. She was one of the first to cash in on the British seemingly insatiable thirst to cook and to learn about cooking.

The most successful television chef to date has been Delia Smith, who successfully produced (and is still producing) cookbooks and programmes ranging from simple style - 'how to boil an egg', through to elaborate cordon bleu.

The current trend for many chefs is local food, British food - i.e. British grown and reared meat and fish, and often organic, where possible. A sub genre of that is wild food: the cook and forager Ferus Drennan takes delight in hunting and picking wild food, and even collecting road kill from the country lanes around Sussex.

Jamie Oliver seemed to hit our television screens and bookshops with a bang over 10 years ago, and his talent hasn't run out. He has been hugely influential in bringing Italian style cooking to Britain, through a series of cookbooks, television programmes, and through a series of popular restaurants. He has shown he has a social conscience too: his work with street kids, turning them into top chefs, changing the terrible culture and quality of school dinners, and most recently in helping the good citizens of Rotherham how to cook and eat and live better.

Other Chefs who Write and Perform for Us

The list of British chefs who perform for us and exhort the book buying public to spend up to £30 on their exclusive new cookbook is long, and ever growing. In a London department store last week, the 'domestic goddess' Nigella Lawson was happy to dress up in a Santa suit and sit on a wooden sleigh to promote her new book extolling the virtues of cooking at Christmas. Many chefs play safe, and try to expand some of the traditional seasonality of British cooking and British cuisine, such that it is.

Other television cooking stars who want the general public to buy their books include Gordon Ramsey, who has made a career out of being brash, Hugh Fearnley-Whittingstall, who has successfully shown the British how to go 'back to the land', and Heston Blumenstall, whose signature dishes include bacon and eggs ice cream, and the essence of foods broken down into foam.

What a wonderful culinary world we live in - and now we can all go out and buy the cookbook too.