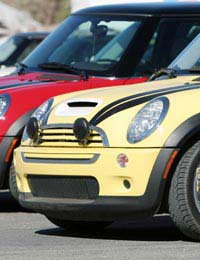 Britain has always been among the world leaders in the manufacture of cars. But the cars which have been produced in Britain over the years have been more than mere vehicles to ferry the family from A to B; British cars have become cultural and style icons whose very sight thrill car enthusiasts from all over the world.

In 1922 William Lyons set up his first company, the Swallow Sidecar Company which - as the name might suggest - was charged with the manufacture of motorcycle sidecars. As time progressed and the business moved into the production of parts for other motor vehicles Lyons hit upon the hit of producing his own line of car which he called the Jaguar.

The first car off the production line was the one and a half litre saloon followed by the two and a half litre saloon. It was followed by two sporting versions - the SS90 and the SS100. During the 1950's Jaguar excelled in the field of British motor sport and by 1959 they had produced the still very popular Mark II. IN 1960 Jaguar bought the Daimler motor company and launched the new E-type Jaguar in 1961.

Jaguar's owner died in 1985 - by then Sir William Lyons - after having retired from the business and being made its Honorary President. The Jaguar Company is still in existence but is now owned by the Ford Motor Company and is still producing high-end luxury vehicles for the more discerning car driver.

Aston Martin again is another classic British car which is synonymous with luxury and speed. A.C Bertelli, a famous racing driver of the 1920's took over Aston Martin in 1925 and began producing vehicles to his own specification using an engine he had designed himself.

During the 1960's the now world famous James Bond movie franchise made the Aston Martin brand a household name - the DB6's first outing included an ejector seat in the 1964 Bond film Goldfinger - and the brand has been used throughout the decades of Bond movies, it's most recent incarnation - the Vanquish - being used in 2006's Casino Royale.

One of Britain's most recognisable cars, the Mini Cooper has been a stalwart of style and iconic culture since it first made its debut on the streets of Britain back in the 1959. Compact and cheap not only to run but to insure, the Mini and its subsequent models - which became known as the Clubman and the Mini Cooper - took the country and indeed the world by storm. In the 1960's everyone who was anyone in the world of show business had a Mini Cooper and they were used to great effect in motor sport; the Mini won the Monte Carlo rally.

The Mini finally stopped being made in October 2000 after an estimated 5.3 million of them had rolled off the production line. The name however lives on which BMW now manufacturing a similarly styled vehicle.

The Lotus brand is another British car that has become world renowned as being a road-going sports car. In addition it too made its cinema presence felt in the form of the Lotus Esprit in the 1977 Bond film The Spy Who Loved Me. However it is worth mentioning that the aforementioned vehicle isn't designed to drive underwater.

Colin Chapman founded the Lotus Company in 1951 and unveiled the Mark VI in 1952. Unfortunately Chapman died in 1982 at the age of 54 and did not get to see how successful his fleet of cars had become but the famous Lotus Seven is still in production today as the Catherham Seven, a car itself no stranger to the world's spotlight.

How to Make Local Shopping Worthwhile