What Is Organic Food? 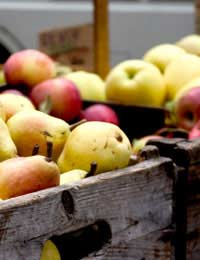 Organic food is that which is grown or produced without the use of pesticides, herbicides, or any other additive or so-called food enhancer. As nature intended food to be grown, or as food has been grown and produced for many centuries.

Organic food is grown in soil that is also free of all these chemicals, and has been certified so. In the UK this certification process is undertaken by the Soil Association, and many farmers are now responding to the growing public demand for organic food, and are farming organically.

What is Non-Organic Food?

Non-organic food, perhaps easier to describe than organic food, is simply that which has been changed in some way, or altered, from its original composition. This may involve using additives, such as flavourings or vitamins (as added to some bottled waters and marketed as ‘vitamin enhanced’ recently), or adding to the soil in an agricultural field, or adding to the feed given to cows, pigs, chickens used in commercial breeding. This also may include food such as corn or maize, which is ‘genetically modified’ (so called GM foods).

The market for organic food worldwide has expanded rapidly in recent years, and if a consumer looks hard enough in their local area, it is possible to find every kind of food that is grown or produced organically. Local stores, supermarkets, and farmer’s markets all sell organic food, so if you don’t see what you want, ask for it (by name or brand) or shop elsewhere.

Fruits and vegetables that are grown organically often taste so much better than those grown with pesticides and additives. The same goes for meat, eggs, poultry and fish. Fish is more often described as ‘caught from wild’ rather than organic, as its origin cannot be guaranteed.

The important thing is for the consumer not to take anyone’s word for it, but to taste several varieties of the same food, and discover for themselves. Create a taste test: buy some of your favourite summer food – raspberries, for example, in organic and non-organic form, and see how the taste varies. It may vary a lot, or not much at all; it depends on the food, its production, and of course, your taste buds!

Green & Blacks is a successful organic chocolate company that makes a great and highly popular product. It was created in 1991, and has since been taken over by Cadbury Schweppes, although G&B remains a stand-alone company within the bigger parent company.

Its products are wonderful examples of how good chocolate can be – from their signature chocolate bar, Maya Gold, which includes spice and orange, and is also made with Fair-trade chocolate beans, through to chocolate with almonds, right through to the company’s more recent range of organic chocolate ice-creams.

If you are a chocoholic, and you want to support the organic producers, the Green & Blacks range is a great place to start. They are made in the UK – so each purchase supports British food.