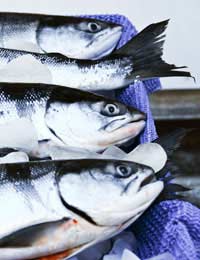 It is entirely justified to buy mainly British goods while in Britain. This supports British industry and agriculture and develops a sense of pride in all things British. Whether it is entirely possible to only buy food and goods made solely within Britain nowadays is uncertain, even unlikely – so much of the infrastructure of shopping is imported (plastics, packaging, cloth, to name just a few), as well as food itself (New Zealand lamb, Braeburn apples, bananas), and goods (computers, electrical goods, music and video, books.

The key to this is to always check the label of items you are thinking of purchasing. Most items, certainly food, have some kind of label of origination, and this should be plainly visible and accessible to the consumer. If not, ask the shopkeeper, and remember that consumers have statutory rights, and one of these is the right to know where the goods are made, grown,or manufactured. If a shopkeeper cannot or will not tell you the origin of something you wish to buy, they are breaching your statutory rights as a consumer, and they should be reported to the local Council, or the Citizens Advice Bureau.

Where to Find British Goods on the High Street

On the high street is the first place a shopper should look when they want to shop patriotically, and buy exclusively British goods. Smaller shops, or those that are one-off stores or independent, are less likely to be plugged in to import networks, and will try to source their goods from the local area, or within the country. These stores deserve customers loyalty and support.

Many stores will be proud of selling mainly British goods and in all likelihood will make a feature of it. House Of Edinburgh Woollen Mill is an examples of this.

Food: British potatoes, carrots, cabbages etc: all seasonally-grown, and from your local area, perhaps bought direct from the farmer at the farm shop. British meat (or Scottish/Welsh) and locally-caught fish. Try Scottish salmon, or fish for it yourself in a Scottish river or loch.

Drink: British or Scottish beer, locally-produced juices or fizzy drinks (not imported): try classic British flavours like real lemonade and dandelion and burdock. Ribena is a British classic! Try out some of the wines coming from British vineyards. Sample Scottish - only whiskey.

Consumer goods: this is harder, as so much is imported nowadays. Look out for Scottish wool products. Keep an eye out for clothes designers who use only British manufactured cloth. The department store Marks and Spencer's might be a good place to try. If in doubt, engage the shopkeeper in debate.