What is Black Pudding? 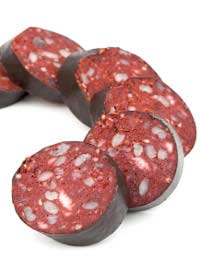 Black pudding is a type of sausage made chiefly from pig’s blood or sheep’s blood, mixed with suet. Into this mixture, onions, lots of salt and pepper, and possibly other herbs and spices are added. It is a speciality food from both the North of England and parts of Scotland, although in Scotland it is regarded as the equivalent to haggis, which also uses animal byproducts. It crops up in several time-honoured recipes in the canon of British food and British cooking. The suet absorbs the liquid of the blood.

Black pudding is known in some parts of the North as ‘black pot’, due to the intense dark colour given to it by the blood, which turns black during the cooking process. It is a heavy tasting thick and meaty sausage, and filling a pig’s entrails with the blood and suet mixture was the traditional way of making it, as sausages were always traditionally made. Nowadays most butchers and sausage makers use an edible type of plastic casing.

Black pudding has always been seen as an efficient way of using all the parts of the animal once it has been slaughtered, and not letting its byproducts go to waste. Many people love the taste of black pudding, and many people hate the idea of it, and will refuse to eat it. It is one of those traditional foods that divide people, and is a national treasure in the catalogue of British food partly because of that. It is certainly a taste experience, and all carnivores should certainly at least try it once.

Some nutritionists and food writers say that blood is good for humans to consume, as it contains so many nutrients. Others say it is bad for us, or that it has no good or bad impact upon our health, and that it is more about the amount we eat, when we eat it, how we cook it, and how we exercise our bodies to balance out the food that goes into them that is the most important factor. As always with food and nutrition, it is a matter of personal choice and balance.

Black pudding is very often a core part of a traditional English breakfast.It is rarely served whole, as few people would eat a whole thick black pudding, but cooked usually by frying, and cut into discs.

It is regarded as a ‘poor man’s sausage’, as traditionally it would be produced quite cheaply and with very little variety in its taste. Nowadays however, many gourmet butchers and food producers create highly flavoured black puddings using expensive additives and organic herbs, and in some places it is likely to be found to be of equal financial cost to gourmet hand-made sausages.

Other recipes that use black pudding as a notable ingredient include cooking it with potatoes, like a sausage and mash combination, or cutting it again into discs, and frying it with vegetables, including cabbage, like a version of colcannon, an Irish potato and cabbage mixture. It can be cooked in an oven, making sure to prick the skin with a knife or fork a few times to ensure it doesn’t burst. Like most meats, black pudding goes well with a sauce or gravy to lend it some moisture against the dryness of the pudding texture.