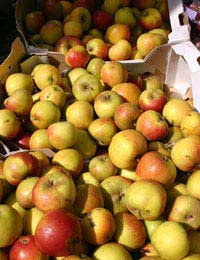 Farmer's markets across the country originally started as a loose collection of farmers and producers coming together regularly to sell their produce to the public, but as they have become more organised, and have now been established in most towns and cities, they have set self-governing rules and accepted some measure of standards and regulations from local trading authorities.

These vary from area to area, but to give an example, the following guidelines have been set down by the association of farmer's markets that operate in the Gloucestershire region of Britain.

This organisation of farmer's markets covers the city of Gloucester, Malmesbury, Stroud, Swindon and Stow on the Wold. The umbrella organisation, Made In Stroud, was set up in 1990, and as well as co-ordinating the local farmer's markets, they run a range of shops on high streets, selling the same sorts of produce available on the markets.

The following are some of their standards that they have set to run the local farmer's markets by.

Criteria for stallholders and their produce:

In addition to self-regulation by a consortium of markets, in co-operation with their local Authority, there now exists in Britain a body called FARMA; the National Farm Retail and Market Association, which certifies genuine farmer's markets, with similar criteria as the example shown.

This, in addition to support and advice given to farmer's markets from the Soil Association, the leading non-governmental organisation campaigning for organic and better-quality food, agriculture and food education, highlights that farmer's markets are run and operated across Britain with high standards, and are safe as well as enjoyable places for consumers to buy great quality fresh, local and seasonal produce. They sell the best of British real food.

The Role of the Soil Association