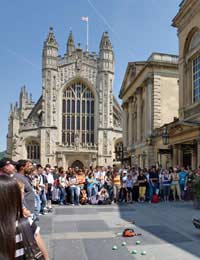 Britain is home to many famous spa towns where visitors can soak, swim and drink the mineral rich waters. The Romans are said to have discovered the therapeutic waters of UK spa towns as far back as 2000 years ago. Today, these towns still attract tourists from around the world.

Bath is arguably Britain’s most famous spa town. Romans discovered the therapeutic powers of the hot, mineral rich waters 2000 years ago. Bath’s Thermae Bath Spa has four hot spring baths, and the rooftop swimming pool with 45ºC temperature waters provides superb views over the city. Visitors can also view the ancient Roman complex although there is no bathing allowed at the complex. The Pump Room above the complex is the place to dine and sip the natural waters. The Thermae Bath Spa is the only natural public thermal spa in the UK.

The Royal Baths of Harrogate in Yorkshire

The Royal Baths in Harrogate first opened to the public in 1897 and members of the royal family did actually visit. The original spa consisted of Turkish Baths but has since been refurbished and now contains a steam room, plunge pool and three hot chambers and cooling rooms. The beautiful arched ceilings and original mosaics are the perfect settings in which to relax and enjoy some of the many treatments available. Visitors can also view the Royal Pump Room Museum and the restored Royal Hall that dates back to 1903.

Buxton is another of England’s famous spa towns. Buxton is a beautiful market town in Derbyshire with pale blue waters that bubble up from the thermal springs. Buxton’s health spa dates back to Roman times and Mary Queen of Scots was said to take the therapeutic waters for her rheumatism. The thermal spa waters are a constant 82 degrees Fahrenheit and visitors can taste the waters at the famous St Anne’s Well. Buxton natural mineral water is also a popular drink sold throughout the UK.

The Salty Waters of Droitwich Spa

The spa waters at Droitwich are undrinkable and are ten times as salty as sea water, similar to that of the Dead Sea. Treatments at the Droitwich spa date back to the Victorian era and the flotation pools are said to hold curative powers. The Droitwich spa brine baths opened in 1985 and are said to be medicinal and relaxing for those who take a dip in the warm brine waters. Floating in the salt laden waters is similar to being weightless and this is the first spa centre built this century in the UK.

Royal Tunbridge Wells in Kent boasts more stately homes, stunning gardens and castles than any other area of the UK. It is also the only spa town in England’s South East area. The famous spring waters are said to have been discovered by Lord North in 1606 who, feeling unwell after a night’s drinking, stopped to take a drink. So amazed was he by the spring water’s curative powers he declared them as health restoring. Visitors can now take the Chalybeate spring waters just as Queen Victoria and Queen Anne did many years ago.

The Scottish Highland Spa of Strathpeffer

Before the discovery of the sulphurous springs in the 1700s Strathpeffer was simply an unknown highland village. On discovery, the spring water was declared the healthiest in the UK and Strathpeffer soon became a popular spa resort. The village pump room dates back to 1819 and the original five wells were said to cure heart problems and rheumatism. Visitors can still take the healing sulphurous waters at the Strathpeffer Spa Pavilion, which is also used for weddings and dances.

The Spa Waters of Cheltenham