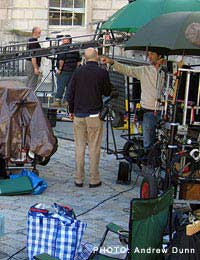 Britain truly is an island full of great films – from social documentaries to funny feature films and serious high-minded drama. From black and white classics starring Alec Guinness, through Hammer House of Horror flicks with Vincent Price as some nasty character, to Scottish youths drugged up and running wild, British film has it all.

Here is a selective list of some of the most famous:

So-called because they were filmed at the famous Ealing Studios in London, some of the group of 'Ealing Comedies' that have become legendary films, creating a new genre, are the following four:

A black comedy of the highest order. Alec Guinness plays 8 members of the D'Ascoyne family, who are killed off when a young man, Louis Mazzini, attempts to inherit the Dukedom of Chalfont. Humour with a dark twist is the basis of this must-see classic. Voted by readers of Total Film in 2004 the 7th greatest British film of all time.

Based on a novel by Scottish writer and maverick adventurer, Compton Mackenzie, this hilarious yarn features a group of remote Scottish islanders trying to hide away an unexpected windfall – barrel loads of whiskey from a wrecked ship. Lightly exploring the Scottish/English rivalry, it is based on a true event.

Also another great vehicle for Alec Guinness, in one of his more scheming, and bungling roles.Stanley Holloway, Sid James, and a young Audrey Hepburn also appear.

Starring Alec Guinness, Herbert Lom, Peter Sellers, and Katie Johnson as the kindly little old lady who runs a boarding house that accommodates Guinness and his crook cronies, this is a dark comedy that is so well made, alternating menace and cunning with kindliness and humour.

This searing tale of a young kid, outcast from his family and his school, who finds solace in nature and the companionship of a kestrel, is truly one of the classics of British cinema; featuring pathos, humour, great cinematography and gentleness, it paints a realistic portrayal of the North of England, populated by characters trying in their own way, to deal with the realities of life as they experience them.

Who in Britain hasn't seen 'Trainspotting' and can remember a line or a scene? Adapted from Irvine Welsh's cult novel of the same name, this instant classic hit the spot with it's depiction of a group of Edinburgh lads trying to get clean and get on in life, but failing with every needle (of heroin) or drug or drink that comes their way.

Filled with great performances by Ewan McGregor, Ewen Bremner, Johnny Lee Miller, Robert Carlyle and Kelly McDonald, and a soundtrack by Damon Albarn of Britpop band Blur, this is one of those must-see films that shows the rough underbelly of British life, with it's rich seam of cynical humour. The American version has its first 20 minutes recut because of the thick Scottish accents the characters have.

A Wealth of Cinema: The Thriving British Scene

This has been a very selective list from the many hundreds, if not thousands, of great British films made here this century. The future looks great for British films too, with wonderful actors and actresses on the scene now, talented directors who have cut their teeth on commercials and TV, and an energised home distribution network, and cinema chains eager to show British product.